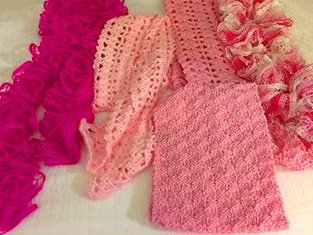 If you looked back in time, either with a time machine or using some ‘kewl‘ online tools, you’d see big changes in this website with both its appearance and activity (or inactivity). One does not need to think very long to know the one-word reason that this critical mission brokedown for a time. But this story is still a terrific read, even though you may have guessed what temporarily interfered with My Pink Scarf™.

Tara has fought 3 battles. Twice with cancer, once with a complication. Three times her life was seriously threatened and three times she has survived!

That would be remarkable enough to make a story but, just like a classic movie, the plot thickens (to say the least).

You see, Tara’s courage throughout her personal battles isn’t what brought me to this honor. It is the organization itself, its very concept, its huge & important mission – this literally forced me to jump in. I had to, just like Tara, I literally had no choice and though I will never be as involved as her, I am there ‘backstage’.

This is not my story or really even Tara’s, here is the real story; A realistic mission to reach out to every woman with cancer.

Wow .. now you know why when the opportunity presented itself (to be involved), we literally could not say no .. !?!

We now host, maintain and have completed a total overhaul of this mission’s online presence, the website you are now reading. And by ‘we’ I mean myself, a creative director, and my brother, Steven Burke, a talented marketing director and personal mentor. Both of us jumped in and as you read on you feel how compelled we were to help.

I warn you now; this mission has a way of grabbing you!

Now let me weave the website and organization’s story with that of Tara (who breathed life into this) in a way she could not herself really ever write. Because after life itself and her kids, for her, the organization is so personal. It’s impossible to separate ‘the person’ from ‘the organization’ and whenever you love anything so much that it is an extension of you, you cannot be the one to tell the tale.

We are blessed that Tara allowed us to help her with this mission, not the other way around. And, so, though I could be writing this in a – shall we say – more professional  (or less emotional) way, instead it will be very personal. As my company (partnershipINchange.com) works to catch this website up by reposting all the old blogs – as our availability allows us – it is my job to get you up to speed on Tara and some of the many things that have transpired.

The website and organization were originally started under another name. A name that was legally owned by a corporation and, after a demand letter, the organization switched to its permanent name, My Pink Scarf™ (a 501(c)3 non-profit organization/corporation; MyPink Scarf, Inc.). A name that is indeed fitting.

By using The Wayback Machine anyone can search any website address of a website that existed, including this one.  Through such a search you can see My Pink Scarf™ went active under this permanent name in 2007. And, in the beginning, it was rudimentary looking affair but then again, blogging was fairly new at that time plus automated website systems, like WordPress, were mere babies.

Later on the site changed, as an individual showed up with an offer to help make it look better and to host it, which he did. At the time this was a blessing, the organization needed it. More importantly the women suffering through the hardships with cancer needed it.  It was great until … (foreshadowing) … but let’s not get ahead of this story.

The site finally had a blog. Woohoo!

Again, you can see from The Wayback Machine that the site started listing events and honoring people, as of course it should. But then, out of the blue, ‘buddy’ simply decided he was tired of the website hosting business and closed shop, dropping the site with not so much as a “see yah later!”

To Tara this meant all the work that had been done was just lost. I cannot imagine how saddened she must have been, her dream was demolished in a an unthinking heartbeat . To her everything was lost, it all had to be redone. And, of course, this also hurt the momentum of the organization, which meant that women would not be getting touched by this mission or that there would be delays.

Tara just wanted to shed some light on the lives of people who were in an unfortunate place, obviously through no fault of their own. To be unable to answer this calling was worse than a tragedy because it was not one life but many.

Then there were the periods when Tara was battling for her life. She couldn’t do media events or planning, let alone handle the requests for scarves, she simply didn’t have the energy, which is more than understandable. Again the organization was set back. And to Tara, on several occasions, it must have felt like it would not go on.

During such times, as far as Google was concerned, the website had been dormant, thus it was not ‘spidered’ by The Wayback Machine (click here to see how the site looked at any time in its 10 year history). Just a quick look shows that from early 2010 till late in 2012 almost nothing was happening. Well, some not-so-good things were happening to Tara but nothing much could happen in the organization because, for a time, its leader couldn’t lead.

Tara had to pay out of her pocket to have the site recreated. This should not have been necessary but when ‘buddy’ dropped the organization he did not share the website files. Had he instead been a stand up guy, sharing what was created so it could be uploaded to another hosting service, this would not have happened. Nor would the job of replacing content be at our doorstep but luckily we knew where to find it, Tara did not and that had to have been like a gut-punch to her!

Throughout it all, Tara paid emotionally and financially to keep it going. Just because she knew what an ugly monster cancer could be and just because she wanted to help others through it,  it was something she simply had to do.

Well, things have now changed. It is no longer all on her!

She is not going to have to pay to keep the site ‘up’ any longer. The site itself will auto-backup to a Dropbox account, so nothing ever has to be lost then recreated and there is so much more ‘under the hood’ of the site now. Stuff that was badly needed. And, if I have my way, the organization will get to the point that it can thrive with or without its founder. As this mission needs to be kept alive!

So much has happened that it would be impossible to recount everything. From sending a pick scarf to a former first lady and getting a letter back from her (Nancy Reagan) to countless media events and magazine articles. We will post as many as we can  on the site and link the appropriate ones back to this post after we get those tasks done.

Anyway, at last, Tara has found the right people to help her. People who knew The Wayback Machine had a lot of the old content, that much of it could be recovered. People who could tie the tasks of the organization into automation on the site. People who could see the wondrous mission of this organization, who would not and could not let it flounder a moment longer. Nor let all the weight rest on one person, even if that person had the huge shoulders of its life giver.

Today the organization is tied to task oriented systems so one person can run shipments. So that registrations for the scarves automatically get data based. So that each person who registers get an inspirational SMS/Text and an email, automatically. So that deliveries trigger another SMS Text Message to tell the woman who is getting their gift that it is on its way!

It is now running like a real organization and the dream that Tara had now has a chance. It is within reach that the organization will be able to send a pink scarf to  every woman with cancer (beginning in the U.S.). And all this will happen without anyone making money off the mission (unlike many other organizationsthat hire professional fundraisers and even high paid ‘execs’).

Welcome to My Pink Scarf™ and God bless Tara. If ever I met one, she is a real-life, living angel .. !!!